NCUIH thanks the awardees for their dedication to upholding the federal trust and treaty obligation to provide the highest level of health to all American Indians/Alaska Natives. 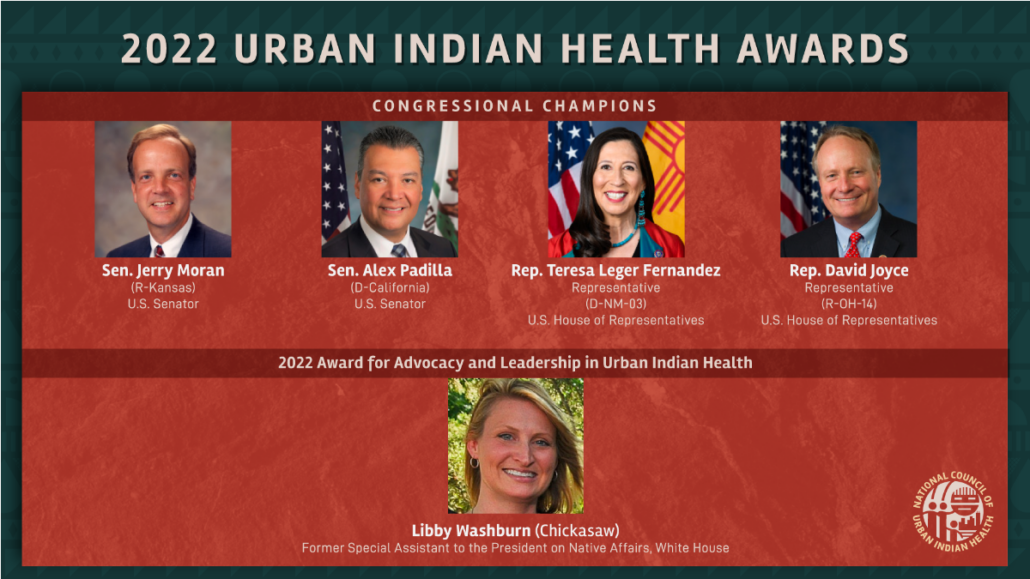 “California is home to more urban Indian civic, service, and advocacy organizations than any other state in the nation serving more than 450,000 individuals, and I am proud to advocate for greater federal support of urban Indian health and autonomy […] The federal government must honor our country’s responsibility to Tribal Nations and urban Indians in all our policy decisions. Urban Indian organizations are a lifeline to Native Americans living in urban areas across California and across the nation and yet too many facilities are aging and underfunded,” said Senator Padilla.

“We know that there are more Native Americans living off our Tribal lands than on, and we know that the United States trust duty to provide quality healthcare does not stop when you move into a city or town. We also know that too often the urban Indian health centers are overlooked and underfunded,” said Representative Leger Fernandez in her remarks.

“I recognize that upholding the Tribal trust obligation is a responsibility shared by all members of Congress regardless of the congressional districts we represent. This trust obligation is not optional. The federal government’s push to relocate Native peoples off the reservations and into cities like Cleveland with the promise of job training and other services during the Termination Era had a profound impact on the lives of individuals, families, and Tribes. When those promises, like so many others, went unfulfilled, the right thing to do was, and still is, to provide culturally responsive healthcare access for urban Indians,” said Congressman Dave Joyce.

Award for Advocacy and Leadership in Urban Indian Health

During her time as the Special Assistant to the President on Native Affairs, Libby was a strong advocate for Indian Country including urban Indian communities. Her advocacy and leadership were responsible for the inclusion of urban Indian organizations in Executive Order 14053 which addresses the crisis of Missing or Murdered Indigenous People. Libby was also influential in including urban Native Americans in the Biden-Harris Plan for Tribal Nations and played a significant role in the development of the first-ever mandatory funding proposal for IHS that was released as part of the President’s FY 2023 budget.

California is home to 10 urban Indian organizations (UIOs) with a service population of 450,000 AI/ANs. Sen. Padilla has made it a priority to ensure that these communities are provided with the resources and care needed. He introduced the bipartisan Urban Indian Health Providers Facilities Improvement Act to pave the way for increased investment in the renovation and construction of urban Indian health facilities. The Bipartisan Infrastructure Framework included the Padilla–Moran–Lankford Amendment to allow UIOs to make their facilities more COVID-19 compliant and safer by fixing a technicality that prevented clinics from using their federal funding to make renovations.

Sen. Padilla and 13 other senators sent a letter to the Biden Administration requesting the establishment of an Urban Indian Interagency Work Group to identify the needs and develop strategies to better serve urban AI/AN populations. He sent a letter to the Senate Committee on Finance urging for inclusion of permanent 100% Federal Medical Assistance Percentage (FMAP) reimbursement for UIOs and Native Hawaiian Health Care Systems in the reconciliation bill. Recently, he joined Senator Smith’s letter to the appropriations committee to request full funding for the urban Indian health line item in FY23. NCUIH is forever grateful for his commitment to helping us achieve crucial goals through his bipartisan leadership to ensure that UIOs are funded equitably and that urban AI/AN values are upheld.

Senator Moran has advocated for the health of all AI/ANs and was an original cosponsor of the Urban Indian Health Facilities Provider Act. On April 9, 2021, Senator Moran arranged the first-ever visit of a U.S. Secretary of Veterans Affairs (VA), Denis McDonough, to a UIO at Hunter Health Clinic in Kansas as a part of a renewed partnership between the VA and UIOs and was instrumental in the enactment of the VA-IHS MOU legislative fix to allow UIOs to be reimbursed for services provided to veterans.

Senator Moran has taken many actions throughout his career on behalf of AI/AN people and we are grateful for his service.

From the time that Representative Leger Fernandez entered congress, she has been a fierce advocate for our AI/AN communities. As the Chair of the Subcommittee for Indigenous Peoples of the United States, she has been an influential voice on legislation impacting Indian Country. She was also a co-sponsor of the Urban Indian Health Confer Act and the NCUIH-endorsed Truth and Healing Commission on Indian Boarding School Policies Act and was a signee of the Gallego Grijalva letter to the appropriations committee to request full funding for the urban Indian health line item. Representative Leger Fernandez forties leadership that cares and expresses the values of human dignity.

Representative Joyce has been a strong advocate in upholding the federal treaty and trust obligations to Indian Country. His commitment to urban Indians is most prevalent in his legislation as co-sponsor of the Urban Indian Health Confer Act, co-sponsor of the Stronger Engagement for Indian Health Needs Act which elevates the IHS director to an assistant secretary, and his leadership as the Ranking Member of the House Appropriations Committee’s Subcommittee on Interior, Environment, and Related Agencies which passed the Tribal Budget Formulation Workgroup recommendation of $200.5 million of urban Indian health for the FY22 bill. We are humbled by his generosity of spirit and compassion for his fellow human beings. 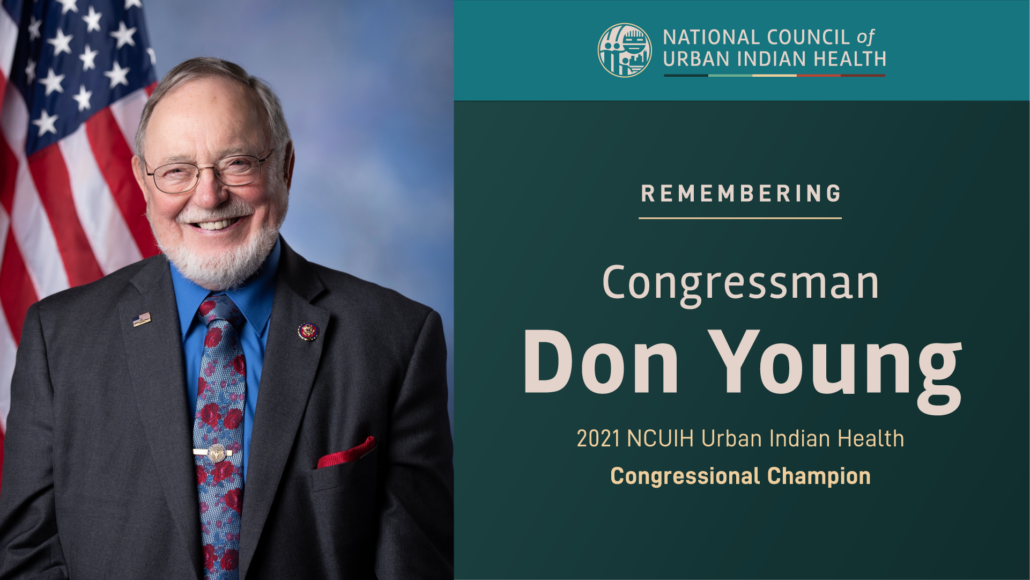 NCUIH also honored the late Representative Don Young, who previously received NCUIH’s 2021 Urban Indian Health Congressional Champion Award. As the longest-serving member of Congress, Rep. Young was a long-time ally of all Native people and tirelessly worked on critical issues affecting Indian Country throughout his incumbency. His leadership on the Subcommittee for Indigenous People was unwavering when it came to upholding the federal treaty and trust obligations and its extension to urban Indians. He championed programs such as the Special Diabetes Program for Indians (SDPI) and led efforts to amend the Violence Against Women Act (VAWA) to criminally prosecute offenders on Native lands, among countless other efforts for the betterment of Indian Country. His fierce leadership, voice, and dedication to upholding the trust responsibility to all Native people will truly be missed and remembered.