On September 28, 2022, Walter Murillo, CEO of NATIVE Health and President-Elect of the National Council of Urban Indian Health (NCUIH), headlined a panel titled “Breaking Barriers: Bridging the Gap Between Nutrition and Health” at the White House Conference on Hunger, Nutrition, and Health. Mr. Murillo highlighted high rates of food insecurity in Indian Country, which intersects with other social determinants of health such as limited housing, employment, and lack of trust in health care systems in Native communities. In the Phoenix area, NATIVE Health has engaged with partners to create community gardens, teach traditional seeding and recipes, and deliver food boxes to elders during the height of COVID to support access to healthy and nutritious meals for urban American Indians/Alaska Natives (AI/ANs).

Video of the panel: https://www.youtube.com/watch?v=U1_iLHCOAeY

UIOs provide essential access to nutrition, food, and health resources for the more than 70 percent of AI/ANs living off-reservation. AI/AN people experience the highest rates of diabetes across all racial and ethnic groups (14.5 percent), compared to 7.4 percent of non-Hispanic Whites. According to a 2017 report published in the Journal of Hunger & Environmental Nutrition, “[u]rban AI/ANs were more likely to experience food insecurity than rural AI/ANs.” Moreover, diabetes and heart disease are among the top five leading causes of death for AI/AN people who live in urban areas. Additionally, urban AI/AN people are more than three times more likely to die from diabetes than their White peers and have higher death rates attributable to heart disease than urban White people.

It’s been more than 50 years since the first and only White House Conference on Food, Nutrition, and Health was held in 1969. At the Conference, the Administration announced a National Strategy that identifies steps the government will take and catalyzes the public and private sectors to address the intersections between food, hunger, nutrition, and health. The Administration sought input on the development and implementation of this national strategy and initiated Tribal Consultation on June 28, 2022.  On July 15, 2022, NCUIH submitted comments to the Administration, the Department of Health and Human Services (HHS), and the US Department of Agriculture (USDA) and recommended that they support urban Indian organizations (UIOs) to promote food security, nutrition, and exercise; include urban AI/AN populations in future research efforts and government projects; and establish consistent Urban Confers regarding nutrition, hunger, and health.

The National Council of Urban Indian Health is hosting a Day of Action in support of Native communities on November 30.

HOW: Use these graphics and our toolkit to post on social media and call on your Member of Congress to take action! 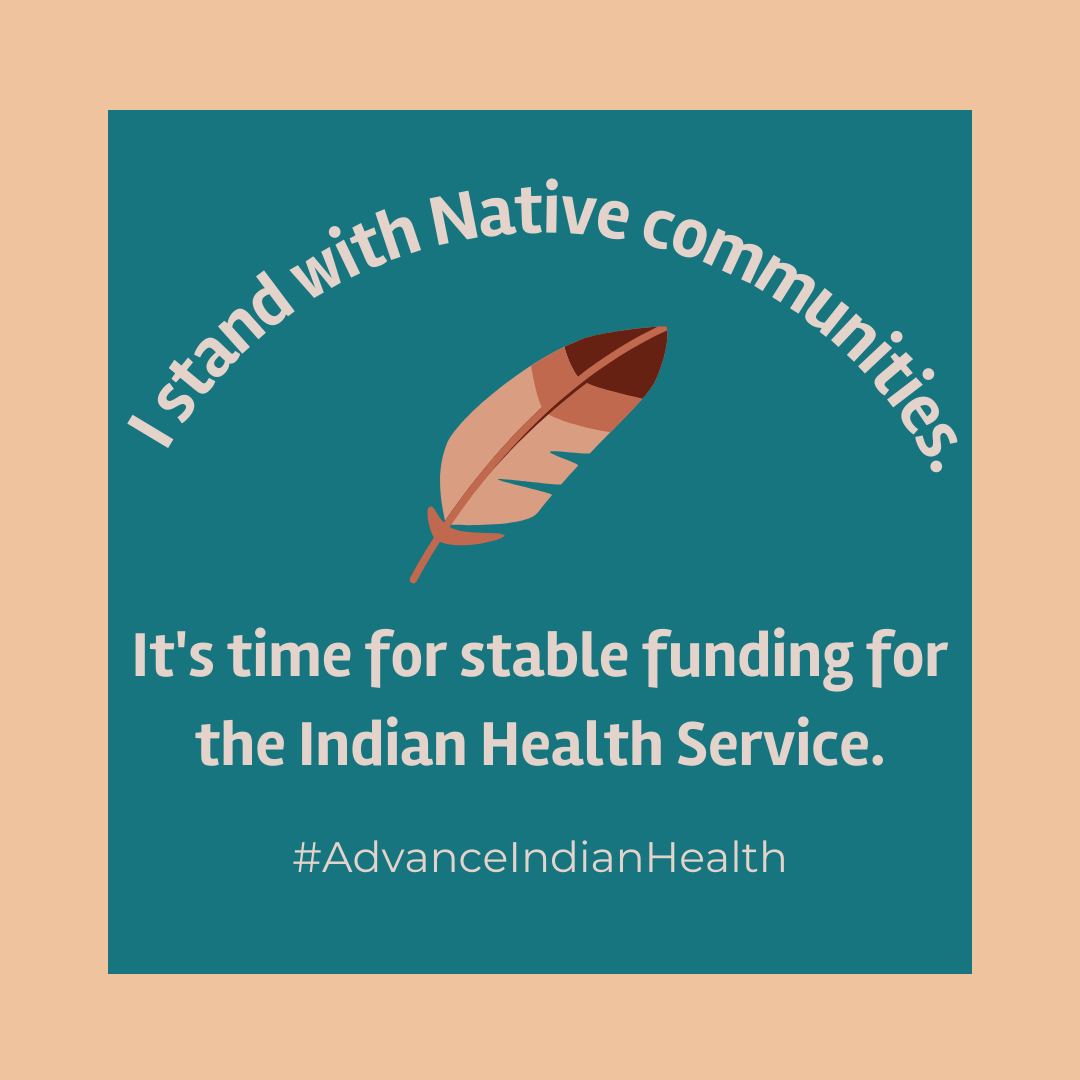 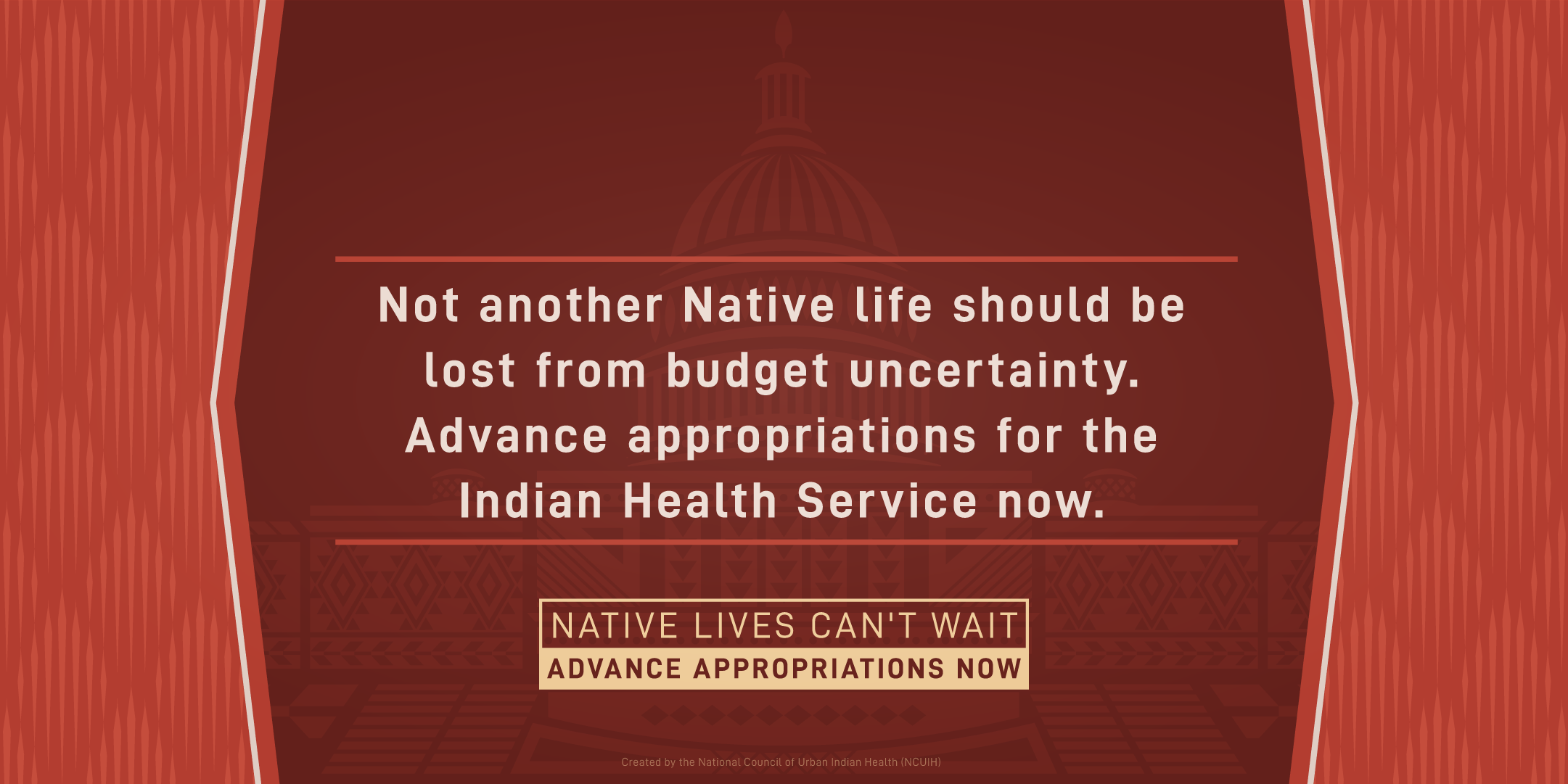 EMAIL YOUR MEMBER OF CONGRESS

Email to Your Representative and Senators

As an Indian health advocate, I respectfully request you ensure the inclusion of advance appropriations for the Indian Health Service (IHS) in the upcoming Fiscal Year (FY) 2023 final spending package until mandatory funding for the agency can be achieved.

The Indian health system, including IHS, Tribal facilities, and urban Indian organizations (UIOs), is the only major federal health care provider funded through annual appropriations. If IHS were to receive advance appropriations, it would not be subject to government shutdowns, automatic sequestration cuts, and continuing resolutions as its funding for the next year would already be in place. We need this to protect Native lives!

I respectfully ask that you honor the federal trust obligation to American Indians and Alaska Natives by ensuring advance appropriations for IHS can finally be made a reality this year.

Thank you for your leadership and your commitment to upholding the United States trust responsibility.

The National Council of Urban Indian Health is advocating tirelessly to Congress to ensure advance appropriations for the Indian Health Service (IHS).

We need your help contacting Congress and posting on social media to support securing advance appropriations and mandatory funding for IHS. The Indian health system, including IHS, Tribal facilities, and urban Indian organizations (UIOs), is the only major federal health care provider funded through annual appropriations.

If IHS were to receive advance appropriations, it would ensure continuity of care for American Indians and Alaska Natives and complement President Biden’s budget request to honor commitments to Tribal nations and communities. In fact, Native communities have experienced deaths due to government shutdowns in the past and according to a recent study, Native Americans experienced the biggest drop in life expectancy— decreasing by 6.6 years between 2019-2021. The lives of Native people should not be subject to politics. We need this to protect Native people and preserve access to health care.

We urge you to post your support for advance appropriations on social media. We also urge you to contact your Member of Congress and request that they support including advance appropriations for IHS in the Fiscal Year (FY) 2023 final spending package. You can use the toolkit below for your advocacy and the text below as a template to call and/or email your Members of Congress.

Thank you for your leadership. Your outreach on this is invaluable to providing greater access to health care for all American Indians and Alaska Natives.

WASHINGTON, D.C. (November 16, 2022) – The National Council of Urban Indian Health (NCUIH) received a letter from the Indian Health Service (IHS) in response to a request to allow urban Indian organizations (UIOs) to receive an exception apportionment, which would protect them from a government shutdown by providing the full-year base funding amounts.

“During the last government shutdown in 2019, five patients died. These are five relatives— mothers, fathers, grandparents— who are no longer part of our community and unable to pass on our cultural traditions that they hold, all because of federal budget disputes. It is atrocious and tragic that the government expects Indian health providers to continue providing services to the most vulnerable population in the country without an enacted budget. Congress regularly fails to reach a budget agreement in time year after year, and Native people are the ones that suffer. Budget delays hinder healthcare delivery and it’s unacceptable. To truly honor its commitment to Native people, the government must act to end budget delays that cost lives. Indian Country has tirelessly advocated for secure funding through advance appropriations for IHS, which is the only major federal healthcare provider funded through annual appropriations. The federal government continues to prove that the safety of Native lives is not a concern, as the government fails to fund IHS in a timely manner and does not provide exception apportionment to the programs that carry out healthcare services to the over 70% Native population living in urban areas.”

IHS has only once, in 2006, received full-year appropriations by the start of the fiscal year. In the absence of an exception apportionment during these budget disputes that may cause the government to shut down, UIOs are subject to the shut down too. Federal shutdowns require UIOs to lay off staff, reduce hours and services, and even close their doors, ultimately leaving their patients without adequate health care.

IHS received an exception apportionment to provide the full-year Secretarial Amount to Tribal Health Programs with Indian Self-Determination and Education Assistance Act contracts and compacts, but this exception does not apply to IHS-operated health programs or UIOs. IHS states, “IHS-operated health programs continue to provide services in the absence of appropriations, even if the health programs are unable to pay health care professionals and related staff, pay invoices for referred care, and purchase supplies and medicines.”

NCUIH has been working with our partners to #AdvanceIndianHealth and has more information on how to get involved here: https://ncuih.org/advance/. We will continue to push for including advance appropriations for IHS in the final Fiscal Year 2023 spending bill to provide funding certainty to the Indian healthcare system.

I am responding to your September 23, 2022, letter, regarding an exception apportionment for Urban Indian Organizations (UIOs). The Indian Health Service (IHS) is committed to hearing concerns about the effect of the Fiscal Year (FY) 2023 Continuing Resolution on UIOs.

Urban Indian Organizations are a critical component of the Indian health care system. The Indian Health Service’s top priority is to avoid disruptions in operations and to lift the unnecessary administrative burden that comes with Continuing Resolutions (CRs), sequestration, and government shutdowns for the entire Indian health system, including UIOs.

In your letter, you highlight actions that the current and prior Administrations implemented to limit budgetary uncertainty and ensure continuity of operations for IHS and Tribal Health Programs during government shutdowns. You also request that the IHS seek an exception apportionment under the “safety of human life” justification to provide UIOs with funding above the pro-rata amount appropriated under a CR.

The OMB Circular No. A-11: Preparation, Submission, and Execution of the Budget, the basis for a Safety of Human Life and Protection of Federal Property (“life and safety”) establishes that exception apportionments may be granted in extraordinary circumstances where the safety of human life or protection of Federal property is a concern during a government-wide lapse of appropriations.

The exception apportionment authority provides a partial solution to the unpredictability of Federal appropriations for the IHS, and is likely the extent of what the Agency can achieve within existing authorities. While an exception apportionment does resolve some of the unpredictability in the IHS budget for some Tribal Health Programs, it is not a full solution to the challenges the IHS faces as a result of continuing resolutions. The exception apportionment also does nothing to prevent the negative consequences of government shutdowns for IHS-operated health programs and UIOs; it only prevents those consequences for Tribal Health Programs in some circumstances. The consequences of a government shutdown directly impact the ability of IHS-operated health programs, Tribal Health Programs, and UIOs to provide high quality health care to the American Indian and Alaska Native communities we serve.

The Biden Administration has taken the historic steps of requesting advance appropriations in FY 2022 and a fully mandatory budget in FY 2023 for the IHS to fundamentally change the way the Agency receives its appropriations and resolve the negative impacts of budget uncertainty. We sincerely appreciate your support as we work toward achieving these goals.

Thank you for your continued support on our shared mission to raise the health status of urban Indians to the highest possible level. If you have additional concerns, please directly contact Ms. Jillian Curtis, Chief Financial Officer, Office of Finance and Accounting, IHS, by telephone at (301) 443-0167, or by e-mail at jillian.curtis@ihs.gov.