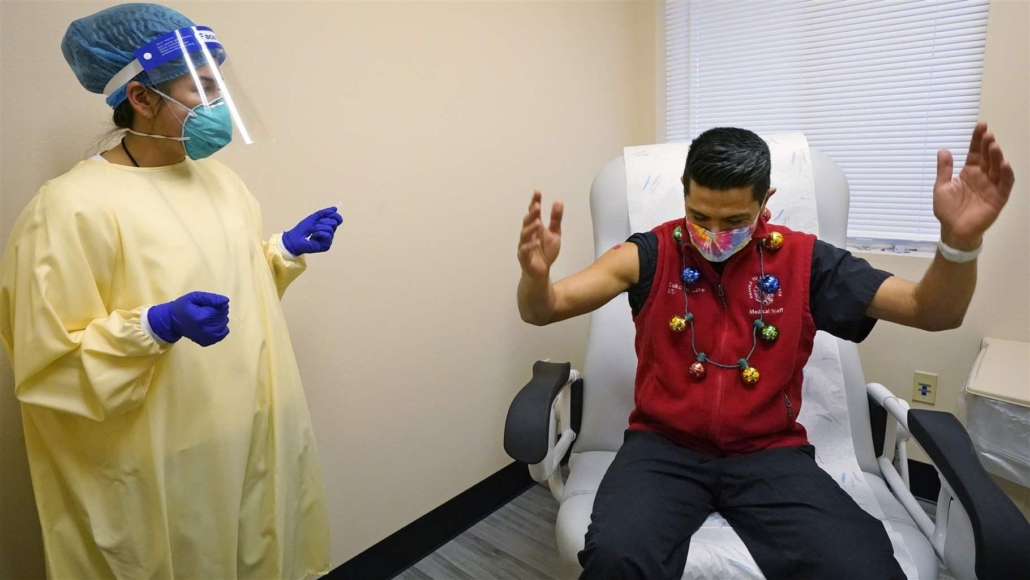 Dr. Dakotah Lane, a member of the Lummi Nation, right, raises his arms in a traditional motion of thanks after receiving a COVID-19 vaccination on the Lummi Reservation in Washington. Elaine Thompson / The Associated Press

This article was originally posted here.

When the Cherokee Nation in Oklahoma began receiving its first doses of COVID-19 vaccines in December, tribal leaders knew exactly who would be getting the first shots.

“We put Cherokee-fluent speakers at the front of the line,” said Principal Chief Chuck Hoskin Jr. “Saving the language is in our national interest.”

During the pandemic, the tribe has lost 35 fluent language speakers out of just 2,000 remaining—many of whom are Elders. In many tribes, Elder is an official title reserved for older members who pass on cultural knowledge, oral histories and traditional practices. The deaths of such members represent lost libraries of “lifeways, culture, stories and language,” Hoskin said. To lessen the toll, the tribe is working doggedly to give out shots as soon as it gets vaccines. The only thing slowing the process is the federal supply.

“Our doses have been administered without any lag time,” Hoskin said. “The only question is whether the United States can keep up with the Cherokee Nation.”

The Cherokee Nation has 385,000 citizens, with 140,000 living on its reservation. So far, 14,000 members have been vaccinated—about 10% of the tribal reservation population. The tribe has vaccinated its Elders and health care workforce, and it’s now offering vaccines to members 55 and older, as well as teachers and tribal government employees.

COVID-19 has killed Native Americans at a faster rate than any other group in the United States, nearly double the per-capita death toll for White Americans and more than a third higher than that for Black residents, who also have suffered disproportionately. Recent data shows Native deaths are increasing faster than those of other groups, worsening the disparity. But among Native Americans, the vaccine rollout so far has been a success story.

Tribal nations have used familiar community gathering places to give out shots, and they’re drawing from years of experience bringing medical care to more remote areas.

The result: Several of the states with the highest vaccination rates—including Alaska, Oklahoma and South Dakota—are ones with large Native American populations.

“The cool thing about our community is we all know each other,” said Alicia Mousseau, vice president of the Oglala Sioux Tribe in South Dakota. “That’s one of the defining features of our response. Our community figures things out fairly well with limited resources.”

Out of a population of about 30,000 on its reservation, the Oglala Sioux Tribe has vaccinated more than 4,000 people. The tribe has had Elders fluent in Lakota offering vaccine information on the radio. Health officials are now offering shots to Elders who are 60 and over, as well as any members with medical conditions.

“This is a ray of hope, and our community has been waiting for it,” said Mousseau.

The United States recognizes 574 tribal nations, which have roughly 2.6 million enrolled members. Based on treaties that many tribes signed when they ceded their land, the U.S. government has a legal trust responsibility to provide health care to tribal citizens. The federally funded Indian Health Service provides care on many reservations, while also distributing money to tribes that run their own health programs. Urban Indian Organizations provide care to the Native American populations in some cities.

When tribes began preparing for the vaccine rollout, they were given the choice to receive their doses either from their state’s allotment or directly from the Indian Health Service. Many tribes that chose IHS have been pleased with the distribution so far, saying the centralized health care system has been more effective than the fragmented approach seen in many states. Some state governments, including those of Alaska and Washington, also have drawn praise for their vaccine coordination efforts with tribes.

The Indian Health Service says it has distributed 493,000 vaccine doses to its own facilities, tribal health systems and Urban Indian Organizations. It’s unclear how many additional doses have been distributed by states.

In northeast Oregon, leaders of the Confederated Tribes of the Umatilla Indian Reservation expect to reach more than a thousand vaccinations by the end of the month. With roughly 2,000 citizens living on the reservation, the tribe has opened eligibility to anyone 16 and older. Chuck Sams, the tribe’s COVID-19 incident commander, credits health care staff for the aggressive outreach campaign and a phone bank that enabled anyone looking to schedule an appointment or ask questions to talk to a live human.

“Our religious leaders said it’s not a time to be selfish. We’re going to have to give things up so that we can continue to practice them after the disease has moved away.”

“Our genetic memory of past epidemics is very strong,” he said. “Epidemics that came through between 1780 to 1860 wiped out nearly 95% of our population. We’re the descendants of the 5% that survived.”

“Our religious leaders said it’s not a time to be selfish,” Sams said. “We’re going to have to give things up so that we can continue to practice them after the disease has moved away.”

Michigan’s Grand Traverse Band of Ottawa and Chippewa Indians reached members with text messages, postcards and “phone tag,” said Chairman David Arroyo. The tribe has about 1,800 members living in the area, and it’s vaccinated nearly 600 so far. Tribal citizens are eagerly awaiting the day they can gather and Elders can emerge from isolation.

“We can’t wait,” Arroyo said. “The social interaction with our community events, whether it be powwow or feast, that’s a key part of who we are. Once this vaccine becomes more prevalent, we can return to the way things were.”

In Alaska, nearly half of the state’s 110,000 vaccinations have been conducted by tribal health systems. State and federal officials have distributed vaccines to 27 tribal health organizations that are responsible for reaching the state’s 229 tribes—many in isolated villages. The hub-and-spoke model has worked well for those groups, which have plenty of experience bringing medical care to far-flung places.

“If this was a top-down deployment, it would have been a disaster,” said Dr. Robert Onders, an administrator with the Alaska Native Tribal Health Consortium. “But these communities are really creative in getting it where it needs to be and not wasting a dose. They’re doing vaccines on the tarmac inside small planes because the vaccine was freezing in the needle outside. Sometimes there’s a desire to picture rural Alaska as vulnerable, but the flip side is it’s incredibly strong.”

One such community, the Seldovia Village Tribe, has administered about 450 doses to the areas it serves on the Kenai Peninsula. Medical staffers already made regular trips to clinics by plane and boat, but in December they began bringing vaccines along for the ride.

In North Carolina, the Eastern Band of Cherokee Indians has reduced some services to dedicate more staff and space to getting shots in arms. Tribal leaders have prioritized Elders and Cherokee language speakers, administering 2,700 doses so far.

Because tribes are sovereign nations, they can establish their own eligibility requirements for the doses they receive from the federal government (some tribes that are receiving doses from a state say they’re following local phasing guidelines). Many tribes have moved to prioritize Elders, though some are sticking to guidelines issued by the federal Centers for Disease Control and Prevention, which put health care and frontline workers before some older groups.

Dean Seneca, an epidemiologist who spent years working for the CDC, said tribes should put Elders first with no exceptions.

Seneca noted that Native people carry the memory of past epidemics that killed about 90% of the Indigenous people in the Americas after Europeans arrived—including smallpox spread deliberately as a form of bioterrorism.

Many Native Americans also have a traumatic relationship with the medical community. In the 1970s, federal law led to the mass sterilization of roughly a quarter of Native women of childbearing age. Following the passage of the Family Planning Services and Population Research Act in 1970, which subsidized such procedures for Indian Health Service patients, many were coerced into sterilizations or had them performed without their understanding. That practice continued until the end of the decade, when activist groups forced the government to adopt new regulations with protections for women.

Despite that justifiable mistrust, a recent survey found that 75% of American Indians and Alaska Natives were willing to receive a vaccine—a higher percentage than the general population. Nearly all those willing to get vaccinated said it was their responsibility to their community.

Tribal leaders say they’ve heard skepticism about vaccines, just like anywhere else, but most members are eager to do their part to end the pandemic. Elders have set the example, while young leaders who have gotten vaccinated have taken to social media to share their pride and encourage others.

Not all Indigenous Americans are part of the vaccine success story. Some 245 tribes are not legally recognized by the federal government, leaving them without health care rights. More than 600,000 Native Hawaiian residents also lack that standing—though the community is divided on whether to seek federal recognition. While members of these groups are included in statistics about the pandemic’s deadly toll among Native people, they’re not included in the Indian Health Service vaccine supply and must seek inoculations along with the general public.

The United Houma Nation, which counts nearly 19,000 members, has been recognized by the state of Louisiana but not the federal government.

“Because we’re not federally recognized, we have no health service,” said Principal Chief August Creppel. “We have nothing for our Native people. Whatever parishes have sites distributing the shots, they have to wait just like everybody else.”

Creppel said the lack of federal recognition has hampered the tribe’s response to the pandemic, and it has lost several Elders to COVID-19. The tribe is hopeful that the Biden administration could change that designation. For now, the tribe’s role is limited to helping Elders coordinate appointments and providing transportation when possible.

Native Hawaiians have been one of the hardest hit groups from the pandemic, but the state of Hawaii has not factored that into vaccine eligibility.

“They do not want to use race or ethnicity as a means for prioritizing vaccinations,” said Sheri Daniels, executive director of Papa Ola LÅkahi, a Honolulu-based public health program. “We fall into other categories that make us vulnerable, but having us vaccinated as a priority group would be the smartest thing to do.”

Reaching Outside the Reservation

Tribes aren’t the only entities getting vaccines to Native people. Roughly 70% of Native Americans live in cities, and 41 Urban Indian Organizations serving 22 states provide care to some of those populations.

Most Urban Indian Organizations have received their vaccines through the Indian Health Service. Those providers have administered 9,000 doses so far and have another 7,000 on hand. They’re hoping to eventually vaccinate 99,000 people across the country. But some will still be left out. Many cities, including Washington, D.C., don’t have any American Indian health providers.

“There’s a Native population who have a federal right to health care but no system or mechanism in place to get vaccinated as a priority population,” said Meredith Raimondi, director of congressional relations at the National Council of Urban Indian Health, a Washington, D.C.-based nonprofit.

The Seattle Indian Health Board has distributed 2,000 doses to Elders, homeless clients and frontline workers at partner service organizations, said Esther Lucero, a Navajo Nation member and the organization’s CEO. It has doubled its number of phone lines and hired three additional staffers to work the call center.

“Our members are willing to get vaccinated,” Lucero said, “not for themselves, but for the protection of our community.”

NCUIH on PBS: Why Indigenous people in cities feel invisible as pandemic wears... Scroll to top