A report by the National Center for Health Statistics noted that between 2005 and 2014, American Indian/Alaska Native was the only racial or ethnic group that did not experience a decline in infant mortality.[1]

Over half of urban Indian organizations (UIOs) provide care for maternal health, infant health, prenatal, and/or family planning. A study of Natives in UIO service areas found that while birth rates, in general, were lower in the urban Native population (12.8 and 16.5 per 1,000 population, respectively), premature birth rates for both urban and non-urban AI/AN were higher than those of all other races and ethnicities combined (12.3% of live births among AI/AI in urban areas and 10.9% among the general population in the same area).[2] 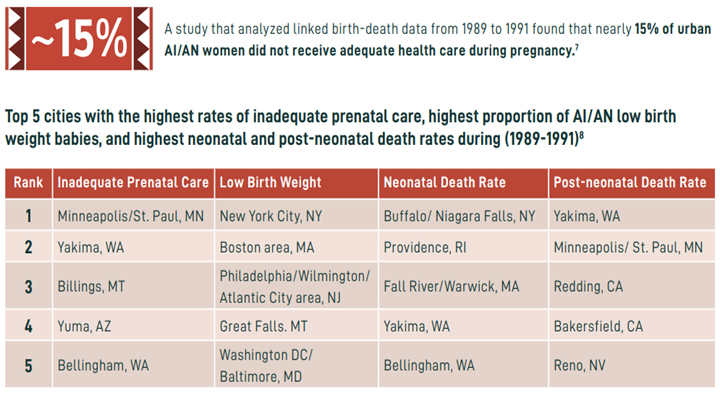 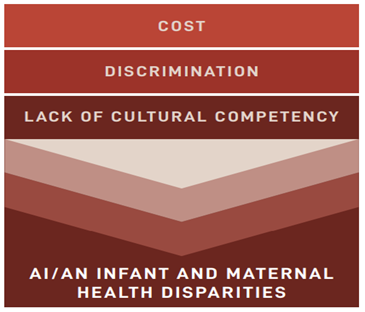 UIO and NCUIH work in AI/AN Infant and Maternal Mortality

UIOs provide a range of services such as primary care, behavioral health, traditional, and social services— including those for infants, children, and mothers. At least 23 of these clinics provide care for maternal health, infant health, prenatal, and/or family planning. They also provide pediatric services and participate in maternal-child care programs such as WIC and the Health Resources and Services Administration (HRSA) Maternal, Infant, and Early Childhood Home Visiting program (MIECHV).

NCUIH has engaged in extensive advocacy on behalf of AI/AN mothers and infants and for increased funding and support to the UIOs which provide maternal health, infant health, prenatal, and family planning services to AI/AN mothers and infants. On March 9, 2022,  NCUIH signed on to a letter to Congress led by the National Home Visiting Coalition in support of reauthorizing HRSA’s Maternal, Infant, and Early Childhood Home Visiting Program (MIECHV) and doubling the Tribal set-aside— which includes UIOs.

Also, in March, NCUIH submitted comments to the HRSA Advisory Committee on Infant and Maternal Mortality (ACIMM), which advises the Secretary of Health and Human Services (HHS) on department activities, partnerships, policies, and programs directed at reducing infant mortality, maternal mortality and severe maternal morbidity, and improving the health status of infants and women before, during, and after pregnancy. In August, NCUIH submitted comments to HRSA’s Maternal and Child Health Bureau (MCHB) regarding the Pediatric Mental Health Care Access Program in August. In our comments, we have continued to stress the critical importance of including urban Natives populations in HRSA’s overall efforts of improving health outcomes for all AI/ANs living on and off reservations.

On September 14, 2022, NCUIH’s Vice President of Public Policy, Meredith Raimondi, testified before the HRSA ACIMM on urban Indian disparities and policy changes to address these disparities. 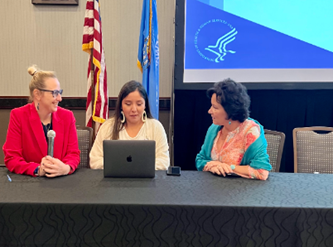 Raimondi highlighted that “over half of urban Indian health centers provide care for maternal health, infant health, prenatal, and/or family planning. However, due to chronic underfunding, many of these health centers only have the capacity to carry out these services for the early stages of pregnancy.” She continued to say, “despite desiring to do so, many urban Indian health clinics cannot expand their services to provide complete care for mothers and infants from conception to birth due to underfunding.” Raimondi provided the following recommendations to the Advisory Committee:

The National Council of Urban Indian Health (NCUIH) released a document on the history of advance appropriations for the Indian Health Service (IHS), which explains the necessity of advance appropriations and provides a timeline on the advocacy, congressional and federal support, and legislative efforts since 2013. The Indian healthcare system, including IHS, Tribal facilities, and urban Indian organizations (UIOs), is the only major federal healthcare provider funded through annual appropriations.

Unfortunately, discretionary budget funding for IHS is repeatedly delayed. Since Fiscal Year (FY) 1996, there has only been one occurrence of timely funding, and that was in FY 2006.

Back in 2014, SCIA held its first hearing on advance appropriation bill Indian Health Service Advance Appropriations Act of 2013 (S. 1570). In a House Natural Resources Subcommittee for Indigenous Peoples (SCIP) hearing held during the last Congress on advance appropriations bills H.R. 1128 and H.R. 1135, former IHS Principal Deputy Director, Rear Admiral Michael Weahkee, reaffirmed Indian Country’s repeated request for advance appropriations stating that “[t]hrough the IHS’s robust annual Tribal Budget Consultation process, Tribal and Urban Indian Organization leaders have repeatedly and strongly recommended advance appropriations for the IHS as an essential means for ensuring continued access to critical health care services. The Department continues to hear directly from tribes advocating support for legislative language that would provide the authority of advance appropriations for the IHS. The issues that Tribes have identified present real challenges in Indian Country and we are eager to work with Congress on a variety of solutions.” Most recently on July 28, SCIP held a hearing on the Indian Health Service Advance Appropriations Act (H.R. 5549) where IHS Acting Deputy Director Elizabeth Fowler reaffirmed IHS’s support for advance appropriations stating that “We remain firmly committed to improving quality, safety, and access to health care for American Indians and Alaskan Natives. Mandatory funding and advanced appropriations are necessary and critical steps toward that goal… [I] urge the House to act on advanced appropriations through the appropriations process with or without the authorizing legislation that is the subject of this hearing.”

The U.S. Commission on Civil Rights report from 2018, “Broken Promises: Continuing Federal Funding Shortfall for Native Americans” serves as another benchmark of support by including advance appropriations for IHS as a key recommendation to the federal government to ensure greater funding stability for IHS.

Since 2013, legislation on this effort has been introduced in 11 bills:

NCUIH has persistently advocated for advance appropriations for IHS by sending letters to Congress and creating educational materials describing the necessity of this important issue impacting Indian Country.

During the recent SCIP, IHS Acting Director Liz Fowler testified that UIOs are disproportionally impacted by government shutdowns. She stated, “Urban Indian Organizations (UIO) are funded through a different mechanism than our tribal programs. They’re funded through contracts and grants and the contracts are federal acquisition regulation contracts.” She highlighted that, unlike tribal programs, UIOs are unable to get full funding during continuing resolutions (CR).

On July 28, 2022, NCUIH recently released a short video showcasing why advance appropriations is critical to insulate IHS, UIOs, and other Tribal health facilities from the negative consequences engendered by delayed funding when there are government shutdowns, automatic sequestration cuts, and continuing resolutions. The video calls on Congress to enact advance appropriations to prevent the loss of  American Indian and Alaska Native (AI/AN) lives by detailing the difficult circumstances resulting from the most recent government shutdown that began at the start of FY 2019, which lasted 35 days. Kerry Lessard, Executive director of the Native American LifeLines of Baltimore, described the experience of her UIO, citing that “We were several months without being paid and that meant services that we had to deny” during the FY2019 shutdown. The impact on AI/ANs was severe, as the Native American Lifelines of Baltimore received seven overdose patients after they were forced to close their doors, five of which were fatal.