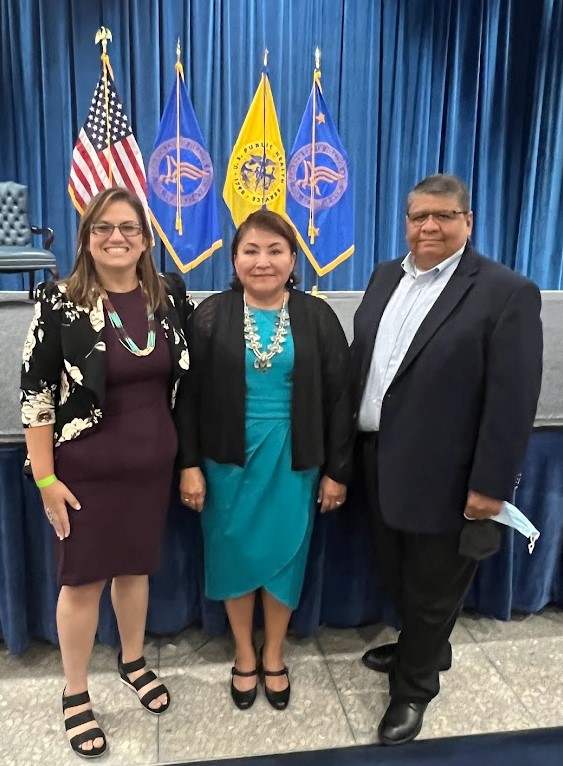 On September 27, 2022, NCUIH attended the swearing-in of the new Indian Health Service (IHS) Director Roselyn Tso (Navajo). NCUIH’s CEO Francys Crevier (Algonquin) and Board President-Elect and CEO of Native Health in Phoenix, Arizona Walter Murillo (Choctaw) were in attendance. Prior to Director Tso’s swearing-in, IHS was without a permanent director for 21 months.

Director Tso is a citizen of the Navajo Nation. She began working for IHS in 1984 and most recently served as the Director of the Navajo Area and Director of the Office of Direct Services and Contracting Tribes until her confirmation. Prior to her work in IHS, much of her professional career was spent in Portland, where she served in several capacities, including working with the three urban programs in the Portland Area that provide services ranging from community health to comprehensive primary health care services. Director Tso holds a Bachelor of Arts in interdisciplinary studies and a master’s degree in organizational management from Marylhurst University in Portland, Oregon. As the IHS Director, Tso is responsible for administering a nationwide health care delivery program that is responsible for providing comprehensive health care services to AI/ANs through IHS, Tribes, Tribal organizations, and urban Indian organizations (UIOs).

The absence of an IHS Director had prevented Tribes, Tribal organizations, and UIOs from addressing the health care needs of their Native American populations, which directly falls under the responsibility of IHS. Since the resignation of Rear Admiral Weahkee, there have been countless requests from Indian Country calling on Congress and the Administration to nominate a new IHS director to address the growing health disparities experienced by AI/ANs. NCUIH has previously stressed the importance of appointing a permanent IHS Director and called for the elevation of the role to Assistant Secretary.

“We are delighted by the recent swearing-in of Roselyn Tso as the Director of the Indian Health Service. We look forward to working with Ms. Tso to achieve the highest health status for all American Indians and Alaska Natives and move us closer to fulfilling the federal government’s trust responsibility to our people. We will continue to advocate for the elevation of this position to Assistant Secretary for Indian Health within HHS to bring better representation for the health needs of Natives,” – Francys Crevier (Algonquin), CEO, NCUIH.

NCUIH looks forward to building a working relationship with Director Tso as we continue to work towards our shared goal of improving the health of urban American Indians and Alaska Natives.

CONTACT US
SIGN UP FOR OUR NEWSLETTER
NCUIH Submits Comments on Executive Order 14053 About Missing and Murdered Indigenous...