THE LISTENING SESSION FOCUSED ON URBAN INDIAN HEALTH SUCCESSES AND BARRIERS AND INCLUDED INFORMATION FROM A RECENT UIO SURVEY ON CAPACITY TO ADDRESS THE ISSUE.

WASHINGTON, DC – (December 13, 2019) On Tuesday, December 10, 2019, the National Council of Urban Indian Health (NCUIH) hosted a Listening Session in partnership with the Indian Health Service (IHS) on “Eliminating Hepatitis C and HIV in Indian Country: A Focus on Urban Indian Health”. Over 15 federal agencies were represented with nearly 100 participants in person and online. This listening session was created in response to the announcement in March 2019 from IHS to create an “Eliminating Hepatitis C and HIV/AIDS in Indian Country Initiative”.

“We are looking forward to a strong partnership between federal agencies and Urban Indian Organizations (UIOs) in reducing the rates of Hepatitis C and HIV/AIDS in Indian Country.  Although UIOs are successfully implementing innovative measures to combat HIV and viral hepatitis for their American Indian and Alaska Native (AI/AN) patients, AI/ANs are ranked 4th in the nation for new HIV diagnoses and insufficient funding of programs directed at this crisis continues to be an issue.  NCUIH is excited to know that IHS has implemented this critical initiative, however it is important for IHS to hear directly from UIOs to truly understand the needs of the programs and AI/AN patients in urban areas.  As IHS and CDC apply for additional funding to reduce infections and provide resources, we urge them to consult and engage with UIOs – to ensure that urban Indian health care is able to provide the same quality of care as the other partners within the IHS I/T/U system,” said Executive Director Francys Crevier.

“Combating Hepatitis C and HIV/AIDS in communities most impacted by these epidemics—including AI/ANs in urban centers—must be a top priority for lawmakers.  Methamphetamine and opioid use have been key drivers of rising Hepatitis C and HIV/AIDS rates in Indian Country and across the United States.  That is why I introduced the Comprehensive Addiction Resources Emergency (CARE) Act, ambitious legislation to tackle the opioid and substance use epidemic head-on.  The CARE Act—which is modeled after the Ryan White HIV/AIDS Program—would invest $100 billion over ten years to fight the epidemic, including over $800 million annually provided directly to tribal governments, tribal epidemiology centers, urban Indian health organizations, and other entities serving Native communities.  I appreciate NCUIH’s support for the CARE Act,” said Senator Elizabeth Warren in a statement.

“In a recent survey of UIOs, many report that the services they provide are making an impact upon the urban communities they serve – and although insufficient funding is an issue, UIOs are able to conduct ongoing activities to fight HIV/HCV while finding opportunities to increase access for AI/AN patients,” said Dr. Kimberly Fowler, Director of Technical Assistance and Research Center at NCUIH.

Rick Haverkate, National HIV/AIDS & Hep C Program Director for IHS provided an update from IHS on HIV/HCV Prevention and Treatment. Dr. Kimberly Fowler and Julia Dreyer, Director of Federal Relations of NCUIH moderated a session with UIOs who provided an overview of the current status of HIV/HCV prevention and treatment at Urban Indian Organizations (UIOs). 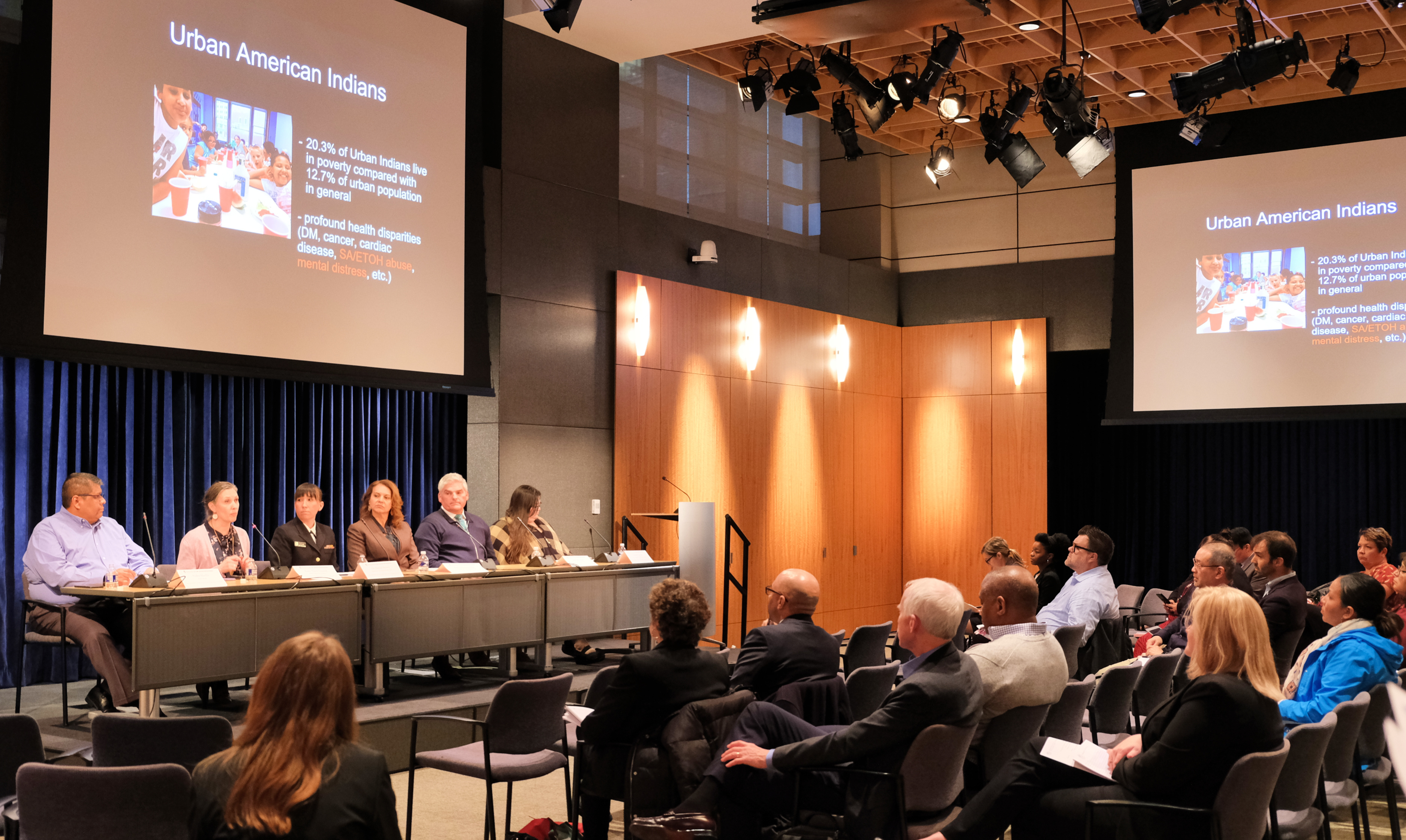 In February 2019, the current Administration announced the Ending the HIV Epidemic: A Plan for America initiative with a primary goal to reduce new HIV infections in the United States by 75 percent in five years and by 90 percent by 2030. Additionally, in March 2019, IHS introduced and highlighted the Eliminating Hepatitis C and HIV/AIDS in Indian Country Initiative under the administration’s A Plan for America initiative. The president’s fiscal year 2020 budget proposed $25 million in new investments to expand partnerships between IHS and Native communities to end the HIV epidemic in Indian Country.

Additionally, it has been proven that reoccurring health problems are more acute for AI/ANs living in urban areas. Urban Indians have greater rates of mortality from chronic disease compared to all other races. Urban Indians are also less likely to receive preventive care compared with the non-Indian urban population and less likely to have health insurance. Survival rates for AI/AN peoples living with HIV/AIDS are lower than any other population. Additionally, Native peoples who have been diagnosed with HIV/AIDS most often suffer from related diseases, such as diabetes, tuberculosis and hepatitis. Mental health, substance abuse and addiction complicate primary care-seeking behaviors of Native people with HIV. Data have shown that HIV diagnoses have steadily increased in Indian Country over the last few years.

Across the country, UIOs provide culturally competent health care services and resources that are critical to addressing these health care challenges while struggling with constant underfunding.  This listening session served as a platform for UIOs to express their community’s circumstances, needs, identify gaps, and to share their perspectives and interests with others who are diligently working to support the “Eliminating Hepatitis C and HIV in Indian Country Initiative”.